Barbados is enjoying a nice calm and sunny morning, with only few clouds on the horizon. At first sight, the situation looks much like we had anticipated based on the wind forecast: calmer winds, and more sugar along with clear skies.

But judging from GOES, Barbados will later be hit by one of Bjorn's flowers (or fish?). Barbados is still southwest of that low pressure system over the Atlantic, and besides receiving some of the sugar fields brought by northeasterly winds, the frontal/convergence region over the middle Atlantic is also spinning off some of the fishes and flowers that come propagating westward.

Also take a quick look at the large-scale wind field at the ~1 km level on below's image from Windy.com, which reveals how strong the winds east of the convergence zone are, and how calm the winds to the west. Despite the lower winds we are seeing, the fish or flowers that hit Barbados are embedded in stronger flows somewhat more south. Overall, I'm challenged by the richness in the synoptic- and mesoscale features that help control the cloud fields that we see. 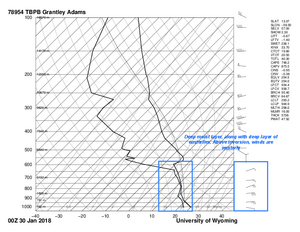 But another thing I wanted to raise is the vertical structure of wind seen from the soundings, and how it correlates with the thermodynamic structure. Bjorn hinted at this during his earlier post on the Ur-Passat. In the attached pdf I included four days of twice-daily soundings from this week, and made a few notes on the depth of the easterlies versus the height of the trade-inversion or strong hydrolapse. It is not uncommon to find that the depht of the easterlies (and reverse to westerly winds) coincides with the depth of the moist (cloud) layer, such as during the earlier part of the week.  Then yesterday and today we see a shift, where the moist cloud layer and inversion are shallower, yet the depth of the easterlies still reaches up to the freezing level. Of course, we are probably much influenced by the specific synoptics of this week. Nevertheless, do we understand the causality of this relationship, and is it reflected in the climatology? I can think of a few ideas that explain why the depth of the moist layer might also influence the depth of the easterlies, including large-scale meridional temperature gradients maximizing near levels of strong cooling (such as near the trade-inversion), leading to reversed flows. Reversed flows might also be mesoscale, as Bjorn and Ann-Kristin and others have been thinking about. And then there is the mixing of easterly winds across a (deeper) moist layer. More thoughts?! I should probably go back and read Herbert Riehl's papers.

If only we had vertical wind profiles more often, and also upstream. More reasons to be excited about Aeolus' launch this year and EUREC4A-2020.

If you are also interested in such ideas, and looking at momentum mixing and large-scale winds in the tropics using a climate model (ICON, in collaboration with MPI-M), let me know. I am looking for a motivated Postdoc for a three-year position at TUD (start date flexible, but in 2018). Looking forward to hearing from you!