The ETH group has been looking at the water isotopes, and at the risk of stealing their thunder I wanted to try and explain a cool result (A1) that they posted on the BCO website. They show stable isotope measurements from the BCO, the first ever, for the cold pool passage on the 23rd. They present measurements of humidity, HDO (delta^2 O) and delta 18 O. The quantity d-excess is usually defined as HDO- 8 (delta 18). So this gives the four curves, from top to bottom: Green is H2O, Red is HDO, Blue is d18O, and black is d-excess. 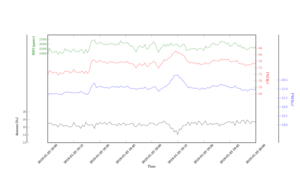 Recall that the cold pool passage on the 23rd (see my post entitled ‘Cold Pools’ from Day 4, and the daily ground measurements in A2) was associated with an arc-shaped line of non-precipitating clouds that passed over the site in the GOES-16 imagery at about 18:20. Later, around 19:15, deeper precipitating convection (with tops near 3 km) passed over the site and appeared to be feeding stratiform layers not unlike those we associated with flowers. The cole pool passage is associated with a clear and sustained humidity jump, of about 10%. This is also reflected in clear jumps in HDO and d18O. What it means is that the humidity in the front, and post frontal is enrished in the HDO and d18O isotopes. Evaporation, from standard water tends to lead to isotopes that are depleted relative to the standard, and condensation tends to concentrate the heavy isotopes, enriching the concentration of heavy isotopes. So if boundary layer water vapor condenses in clouds and forms precipitation that falls and evaporates, the resultant water vapor is expected to be enriched, which is what we see and why we see the moisture front associated with the cold pool as evaporatively driven. This is also consistent with the further enrichment that we directly observe with the precipitation at 19:15, but this is different in that it  lso has a signature of d-excess which is not evident in the initial cold-front passage. The d-excess is a signature of non-equilibrium fractionation, again which I (the neophyte) might expect if the precipitation is heavy and not completely evaporating. Why the moist front at 18:20 doesn’t have the same signature is a mystery to me.

Based on idealized LES Langhans and Romps recently concluded that: "For over a decade, the prime suspect has been the precipitation itself. As precipitation begins to falls through boundary-layer air, it cools and moistens it. As the cold pool spreads, that humid air would be carried to the edge of the cold pool, forming the familiar water-vapor rings. But, as shown here, this is not the mechanism that generates these rings.” Well the measurement call back into question this interpretation, at least in so far as I understand them. Langhans comes from the ETH group of Christoph Schär, so maybe Franziska Aemisegger (or Heini Wernli, also at ETH and who she works with) finds an opportunity to provoke their colleagues … assuming of course (and this is a big assumption) that my isotopologue 101 lecture didn’t get everything backwards.