This afternoon I thought to look a bit more at the diffuse (downward) LW radiation from our sensors at the BCO. I was motivated to follow up my earlier thread about the lack of days or periods really with no clouds, and yesterday’s daily summary of radiation (A1). What you see is that after about 18:30 UTC (ca 14:30 local solar time as Barbados is at 60W) is that the diffuse solar is very small and constant, and the global solar follows more or less what one expects for clear skies. Also the diffuse LW is quite small and not variable, i.e., less than about 380 W/m^2. 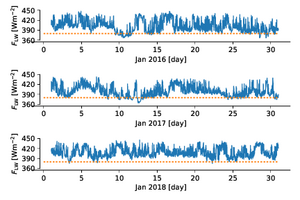 So I decided to look back at the data for the last three Januarys, 2016, 2017 and 2018. Here I plotted the 15 min data (aggregated from the 1 s data) to look at the time-series. What you see is that periods where the diffuse LW is below 380 W/m^2 (as indicated by the blue line dipping below the orange dashes) are not very common, and generally not very extended. There are a couple of periods which can be considered exceptions, for instance there exceptionally low values around Jan 13, 2017, and early on Jan 11, 2016 (A2). There are no such periods in January 2018.

Then I decided to take all the 15 min aggregated periods from Jan-Feb 2016-2018, for which we have five months (as I did not include this February as we only have a few days) and look at the (normalized histogram, or pdf) of these data. This is shown in A3. I claim the data can be thought of in terms of three modes

- a normally distributed mode with a peak near 395 W/m^2, which is the shallow cloud mode

This seems to fit with the time-series of the radar data attached (A4) and the world view which I link to here: 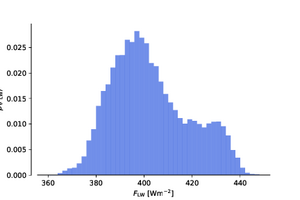 And also the lidar water vapor (A5). Here I think we see see the value of the continuous water vapor profiling with the Raman system, as we see the sharp reduction in diffuse LW is associated with a shallowing of the sub-cloud layer (not necessarily a drying of it) and the absence of condensation at cloud base. For this look at the periods near 9:30 and again around 18:30 on the water vapor profile time series.

This gives anecdotal evidence that the venting of the subcloud layer by cumulus clouds, which are almost always present, is fundamental to the equilibrium of that layer, and helps insulate the surface. Only in rare circumstances when large-scale subsidence and weak winds conspire to prevent the PBL from deepening to the depth of the LCL do we see periods of truly no clouds, where Earth tosses away its last vestiges of modesty and exposes itself to space … all of which to say is Earth, unlike Northern Europeans in their Saunas, is rather modest in this regard. Maybe a less dynamic circulation would be even more modest?

If you feel like taking a peak look here: http://col.st/wm4bA